Are you a Softball player still performing wrist flicks? If yes, why do you think you are doing them? Is it to strengthen the wrist and create backspin or is it just something you are doing because your coach told you to do them?

If you don’t really know WHY you are doing the warm-up, you probably should consider asking the question first. It’s OK, I’ll go ahead and ask it. Why are we performing Wrist Flicks?”

Wrist Flicks take too much of our training economy and we aren’t really getting better from them. Let’s find the best way to train arm pathway and sequence by creating the most efficient movements possible. 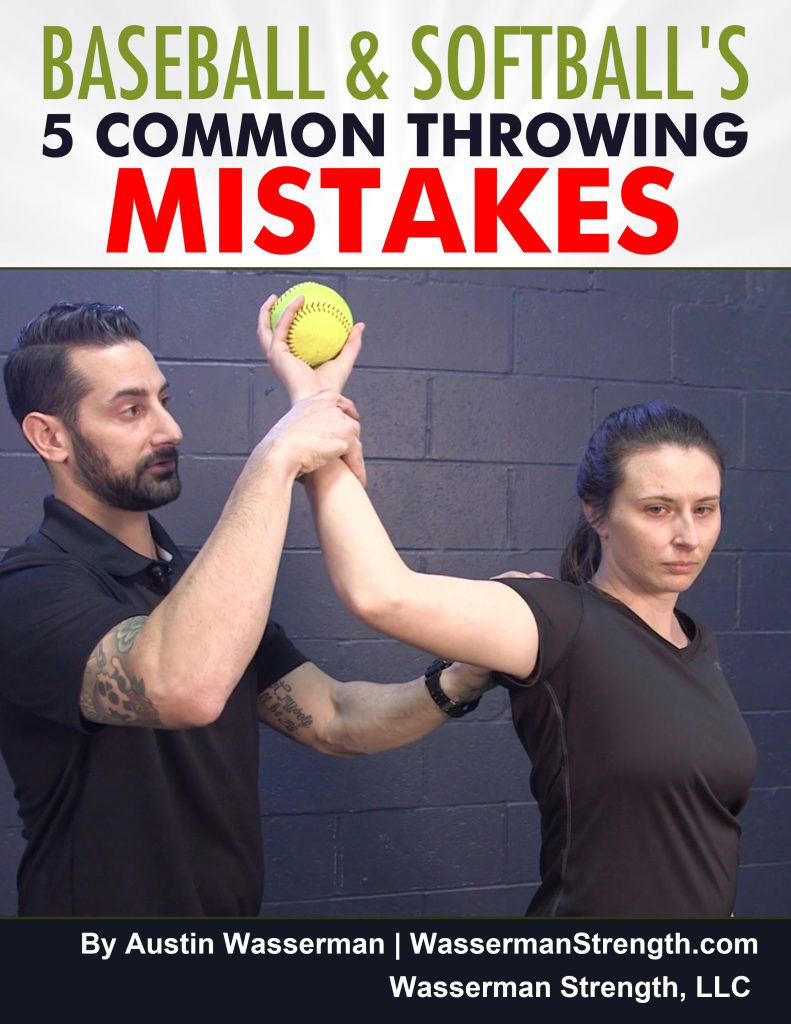 So why is it that the majority of girls look like they’ve never thrown something before? Why do they have a tendency to push the ball when they do throw! This is due to improper throwing mechanics and the fact that girls are not taught at a young age to learn the overhand movement.

From this lack of usage, most of these players will continue to have elbow pain and cannot efficiently use their bodies during the throwing motion? It is because they are reinforcing poor throwing mechanics and not focused on learning how to pattern and sequence the arm.

The pushing motion is when the elbow drifts out in front of the body, with the elbow in extreme flexion or collapsed against the forearm. This creates an awkward “push” motion suggesting more total compression forces on this joint.This is a timing issue and a scapular inefficiency.

With this style of throw, the arm then has a shorter time to decelerate through ball release since there’s late pronation and late humeral internal rotation. This causes the decelerator muscles of the posterior shoulder to work harder than it should.

Scapular Upward Rotation is non-existent in these athletes as the shoulder blade doesn’t efficiently move and bring the arm up into position, so the body looks at the elbow joint to create this lack of shoulder range of motion and mechanics!

Scapular Upward Rotation is the movement of the scapular (shoulder blade) along the rib cage to allow the humerus to elevate properly so that it is cleared to move into external rotation or forearm “layback.” This lack of scapular upward rotation is a HUGE problem in softball throwing athletes!

*See the videos below for proper sequencing and patterning of the arm!

The Wrist Flick will cause the athlete to push the ball and have an “out in front” feeling. The BRAIN is being taught to position their arm out in front of their body to release the ball, instead of releasing the ball in-line with their body.

The L-Drill Set-Up is a positional throw, not a movement THROUGH positions, so the athletes never understand how to move the arm back into load and through shoulder external rotation to ball release. This initiation movement is foreign to them because they were taught a static set-up, hindering the overall throwing sequence.

Below is a video of what a the throwing pattern and sequence should look like from various set-ups and by position. Notice the fluidity in each body segment, building up energy and unwinding and releasing that into the ball. This is a sequential summation of movement as the body works in an organized way to accomplish the task!

This Arm Behind Drill is great to feel what it’s like to have the arm stay back as long as possible while the hips start to move forward. You can also feel the latissimus muscle activated since the lats insert into the humerus. The position of the elbow should be at about a 45º angle.

As you turn slightly to your throwing shoulder (Trunk Rotation), the arm will start to drive back via the scapular (shoulder blade). Once the arm gets to its furthest point back and loaded, it will work its way into and through shoulder external rotation. As the arm is moving through external rotation, the hips rotate, the trunk rotates and the forearm unravels through ball release towards the target.

The Dynamic Throwing Drills (Double Hop, Reverse Rocker & 1/2 Kneel Turn & Throw)
are a few more great throwing drills we used in our High Level Throwing progression for athletes of all positions. It helps athletes utilize their body efficiently and focuses on intent to throw and move fast! This also helps with separation, arm action, glove side movement and lead leg stability!

We did minimal long toss because if we would’ve long tossed with poor mechanics, she would have had elbow pain immediately. We also didn’t do any true weighted ball throwing! This was a pure focus on arm pattern, sequencing and strength training using bands, medicine balls and stability balls!

The take away message is that there are much better ways to train throwing mechanics and help prevent injuries to the very vulnerable elbow joint than using Wrist Flicks, L-Drills or standard warm-ups. We are wasting time as coaches and athletes with this and not properly utilizing the structures that are most important during the throw! Remember, throwing is a movement pattern, a series of movements throughout an entire movement sequence!

The High Level Throwing® Program helps athletes, coaches and parents identify some of the most common  throwing issues and how to troubleshoot them using constraint drills and programming.

This area can be used to add an Opt In form.

Not Sure Where To Start?